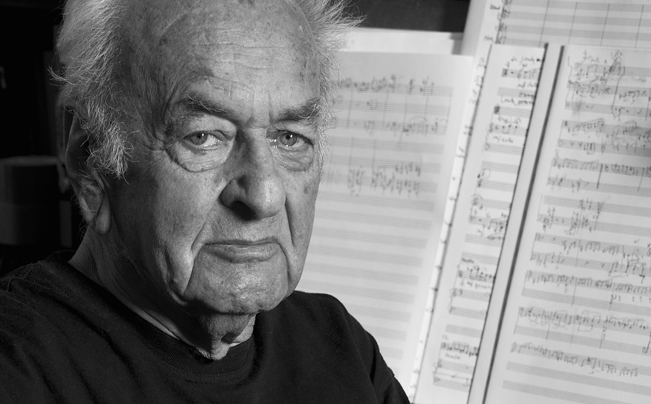 I was born in 1928. My parents had me starting my music education at age 5. Both of them were excellent pianists, therefore I had a good start as a musician.

I was accepted at Franz Liszt Academy of Music as a composition major in 1949. My professor was János Viski.
I wrote a symphonic music piece, “Mauthausen”, (1959) for my diploma.
I had written several instrumental pieces prior to Mauthausen: a “Fantasy for Violin and Piano”, a “Rhapsody” (1959) and several works for wind orchestra. I made my acquaintance with instruments early on, and the possibilities excited me. From my earliest years I had a great respect for performing musicians. That musicians not only myself find enjoyment in my work has always been my guiding principle. Also I have never compromised in matters of style, regardless of prevailing fashion or the presumed taste of the public, or other considerations.

My law is the unity between theme, harmony and form. In my many decades of composition, I remained faithful to these principles.

No doubt, at times I was attracted by some contemporary music. Initially I was much influenced by Bartók. In the Hungary of the 50s, Kodály was the “gold standard”. On rare occasion, mostly from radio or by sporadic performances of visiting artists could we hear Bartók. These events had a great effect on me. Among others, this would be the young Bernstein, who performed “Music” (for strings, percussions in 1949).

Bartók’s influence is detectable in my “Rhapsody for Violin and Piano”. This is a fascinating musical system: from down upwards, a so-called “acoustic scale” (raised
fourth and lowered seventh). Perhaps it is interesting to note, that this was instinctual on my part, dictated by my inner hearing, not a conscious choice.

In those early years I also wrote “Concertino”, a short piece in three movements for piano and wind. I was not aware of how much Bartók’s and Sravinsky’s exciting rhythm permeated that music. Had I been conscious of this, I certainly would not have written this piece – that has been played over 120 times world-wide… At times I played the piano part.

From the early sixties on, my style – form, instrumentation – underwent dramatic changes: the prior, more classical form gave to free constructions. I have been using improvisation, and developed a synthesis between “aleatoria” ( in which I give a few notes as starting point to the performer ) and strict organization. One such example is my “As you like it” for two pianos. In addition to chamber and solo pieces, my larger symphonic music and oratorios were born – for instance my “Four Invocations for Orchestra”, and my oratorio “Orogenesis”.

Here I am living in the twenty-first century. I am open to every direction. I am interested in any good contemporary music provided it is honest and touches my emotionally and or intellectually. I have no patience for the artificial, art for art’s sake or momentary fashions in which the world in upside down, just because.

That my musical principles bore fruit is witnessed by the fact that the overwhelming majority of the work you will find below was commissioned by artists, musical institutions, radios, festivals. I was awarded numerous prizes, including: